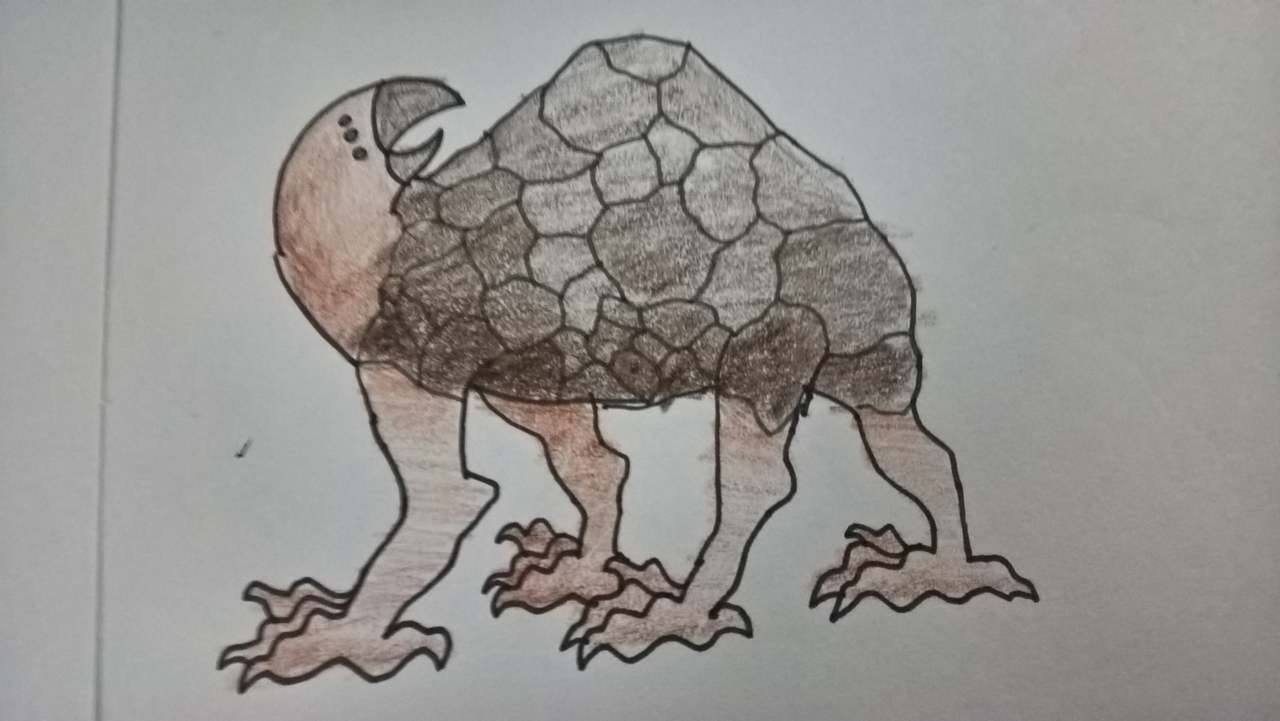 The rheark is a remarkable bipedal beast of burden that comes from the mountains of Belbösu. It has a beak, talons, and a shell very reminiscent of those that turtles have.  Long ago, they were domesticated as animals that are used for both carrying weight and riding.

The habitat of the rhearks has its origins in the Nuleeo province of Belbösu, but they are very adaptable animals that soon spread all over Wisteria. The high peaks of the mountains were far too cold, barren, and without life, but the rocky valleys of Nuleeo suited the rhearks perfectly. Their oddly shaped talons are used to grasp the loose scree of the valley floor and their beaks are perfectly adapted to pick out insects that hide in the cracks of the rocks. Over time, the rhearks developed a strong carapace that has the same consistency of a rock. There are a few reasons that this carapace developed: firstly, it provides camouflage against the rocky terrain in which they live, but more importantly, it protects them from avalanches that often pester the cliffs of Belbosu.

When the rhearks were first domesticated, they were only ridden for short distances across canyon floors because of how uncomfortable riding on the carapace of a rheark can be.  At this time, riders would use large rocks to firmly tap on the sides of the carapace and guide the rheark in the ways that the rider wished them to go.

Over time, rheark riding became more comfortable and less dangerous.  Riders started by draping soft fabrics on the rheark's back to stop chaffing and allow people to travel longer distances.  At first, these fabrics were just thrown on top, but they would often slip off--sometimes taking the rider along with it.  Combined with the fact that these animals were often ridden atop stony scree, which can be problematic when riding at a rheark's top speeds (about 15mph).  It was not long before metalsmithing traveled from Lädom to the secluded canyons of Nuleeo.  Riders began developing metal tacks that clung the fabrics onto the carapace, making it much more secure.  Not secure enough, however, as the carapace was still too slick for some riders.  Some people began to carve footholds into the sides of the rheark, which fixed the problem but also caused a backlash due to many believing that it discomforted the rheark.

Those people were not entirely wrong, as it did give the rheark immediate pain when carving too deep into the shell.  However, once the holes were carved, it caused the rheark no more pain.  One particularly resourceful rider found out that a certain insect found in the higher ecosystems of the mountains functioned as an anesthesia.  This needed to be done regularly because the carapace would slowly grow back, like a human fingernail.  Eventually, people started hammering stirrups into the sides instead, which lasted much longer.