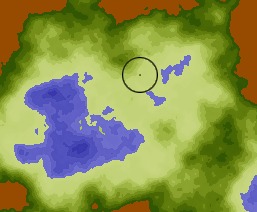 The Great Tether (commonly referred to as just "Tether") was the first city ever built, founded by Gaelroy the explorer, Eve the dame, Merloc the beastmaster, Haze the shadow and Merril the merry, with ancient magic forcing a large zone of Euclidian geometry. It is the only area in Gaelroy to have such geometry, as a side result, over 99.99% of the new-bound are "tethered" within a 100km radius of the city. This also includes creatures & beasts from other worlds too.

As a result, an overwhelming portion of the population consists of the tethered, especially the new-bound, unlike most other cities/villages. This huge, constant influx of people prevents much of a government from forming, the closest form of authority are "guides"; wise, altruistic individuals with at least a decade of experience. There usually aren't any more than 4 or 5 guides around at any time. They offer advice & are widely respected, but do not have any actual power beyond their own physical capability. Tether is otherwise leaderless.

Other side effects of tether's unique geometry include the formation of similar cities in the other planes (E.g Graaz), as reflections of tether. Some inner worlds have "tethers" as well, although they generally lack the same tethering capability.

Tether is also a great place to find information from other worlds, as well as basic necessities. Raids are rare, but thievery is common; most new technologies and magical items find their way into the coffers of information brokers one way or another, usually within a week of its arrival. To complicate matters, not all new-bound grasp the concept of ownership, & may unknowingly steal items of value.

Tether's Beacon can be found in the centre of the city.