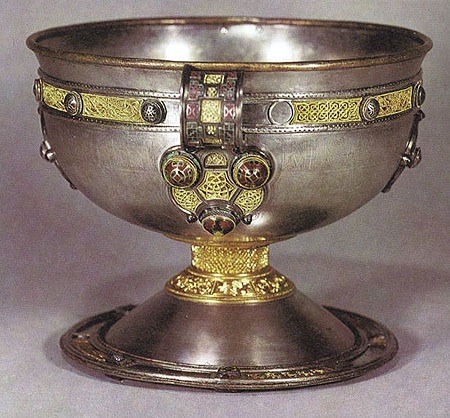 The Grail of Kings

Background: There is a Dwarven Opera that details the creation of this Rune Item.  "Knohuri Kno'xian" or "The Pride and the Fall" tells a tale of four elemental Dwarven Kings who hated one another so fiercely and relentlessly that they drove each of their kingdoms into ruin. When the realities set in after nearly a century of war, each of the kings were deposed, their souls ensnared, and forced to fight one another forever in a gilded drinking vessel crafted by their finest rune smiths.

Personality: The last gem touched determines which of the following four personalities are dominate.

Ruby-Fierrere: Speaks Elven and Ignan in a high pitched squeaky voice. Likes it when you sell your services for less than they are worth, dislikes it when you harm people, especially gnomes and dwarves.

Emerald-Harali: Speaks Aquan with a slow booming voice. Likes it when you take as long as possible to make important decisions, dislikes it when you volunteer for anything.

Diamond-Uhrt: Speaks Terran and Giant in a low menacing tone. Likes it when you are unnecessarily aggressive. Dislikes leaving heavily populated areas.

Blue Sapphire-Ymiri: Speaks Auran in between sobs. Likes it when there is a broken heart or a personal tragedy, dislikes telling others what to do.

The Grail of Kings 4 unlocks

Any liquid poured into the goblet may be copied. You may copy liquids a number of times equal to your character level per day.

Any liquid drink from the cup is purified. The bearer may turn any water poured into it either into wine or holy or unholy water. At level 10 the cup may turn water into any non magical  liquid that is mostly (75%) water. This liquid changes back into water if not drank from the goblet.

4 gems if touched before pouring in liquid bestows a magic effect with no save if drank. Each gem may be used once each day. Each unlock allows the bearer to use each gem an extra extra time per day.

Ruby-cure 1d8 per character level in HP as well as cure any poisons or disease.

Unlock- The Drinker  gains the breath weapon ability of a green dragon if he drinks from the cup. Count the drinker as twice his character level in HD to determine size and damage and dc of the attack.  This effect lasts 1 round per character level.

Diamond- +1 natural armor bonus at first level and every 4 levels. This effect lasts 1 minute per level.

Unlock-you gain an extra full round of actions (but not a swift or immediate action) each turn starting on your next round. This effect lasts 1 round per every 4 levels. After the effect ends the drinker is unconscious for a number of rounds equal to the number of extra rounds they took. This unconsciousness is not preventable.

Blue sapphire- cannot lie, but is not required to tell the whole truth.

Unlock-you gain detect thoughts out to 100ft. You may fire a mind blast (100ft range) once each round as a standard action. It is a ranged touch attack that deals 1d10 per level damage. This is a mind affecting attack.  This effect lasts 1 round per level.

Full unlock: You may bestow any combination of the above effects with a single drink as long as you have uses of each of the effected gems per day charges left.

Also by using one of each gems charge the bearer can bestow a new effect: You are treated as having maximum hit points for your level. You heal up to full hit points every 1d4+1 rounds. You gain spell resistance 12 + your level. You also gain a +2 luck bonus on all saves, skills, ability checks, and attacks as well as one reroll for any one d20 roll you make during the duration of the effect. This effect lasts 1 round per level.