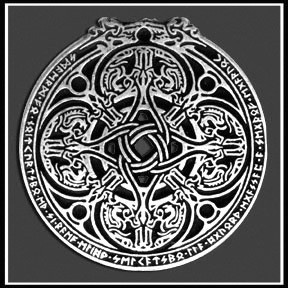 The Bulwark of Vigil

Background: a Solar angel named Gilliadwyereth volunteered for a rearguard action against a great Dwarven Host near the end of the Elf-Dwarf war. He slew a hundred score of their best warriors in a narrow mountain pass where only a few could attack him at once. Finally the Dwarf General Raffellos simply collapsed the pass with the help of his expert engineers. Gilliadwyereth was found crippled but alive under the rocks. A master Runesmith was traveling with the army. Both of his sons perished in battle with the Solar and his heart ached at the folly of the war. In his grief he created the greatest of his creations using the souls of the fallen dwarves, the soul of Gilliadwyereth, and his own.

This +1 animated ghost touch shield can be of any type the bearer is proficient in. It can change type as a full round action

Once per day and an additional time per day every five levels the bearer may cast this shield to the ground to have it spring forth as a wall 5 feet wide and tall per level. This wall has a hardness equal to twice your level and toughness equal to your level times ten. If destroyed, the wall disappears and the shield returns to your hand. You may recall the wall back into shield form by touching it. Use as a standard action.

If any enemy attempts to move through your reach with this shield you gain an attack of opportunity that cannot be negated by tumbling and works even if you are not aware of the target. If this shield attack hits the target may not finish their movement.

Twice a day as an immediate action the shield can try and dispel any spell or ability used on you with a duration longer than instantaneous. The caster level is equal to your character level.  This dispel effect only works on a single spell or effect. You do not have to be conscious or take any action for this effect to work.

Twice per day: Spellturning as the spell

When used as a barrier your shield can count as a wall of force.

All attacks of opportunity made with the shield deal damage as if it was a confirmed critical.