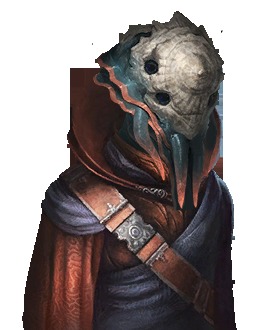 The Wacegi are a Molluscoid species, originating from the Wacegi Confederacy. A sedentary people, they are rare sight to see outside of their nation, with most Wacegi preferring to stay in the world they were born in. Wacegi are also known to be communal, helping your community is seen as a primary part of being Wacegi.

Wacegi are instantly recognized by the outer shell on their face. Despite popular belief, this shell does not offer any protection against firearms, altough it is still durable against light forms of blunt force trauma.

The Wacegi "mouth" is comprised of 4 tentacles emerging from this face shell, 2 at the front and 2 at the sides. Wacegi use the frontal tentacles to form words, while the ones at the sides are used to add emotion to those words.

Wacegi body not covered by this exterior shell has an almost jelly like texture. These areas are more prone to injury.

As previously stated, Wacegi are sedentary and communal, staying in the communities that they were born in is what most Wacegi prefer.

Most Wacegi are known to be proud patriots of their country, with a love for independence. Altough they love to praise their country, they almost never do so by insulting anyone else's.

Wacegi are known to be kind and welcoming of any species, opening their doors and worlds to all of the galaxy.

Wacegi worship what they call "The Aurora", a deity that they believe looks over and protects them. They in turn build temples, pray, and do good deeds in the name of this Aurora.

Researchers claim that this worship started early in the ancient days of the Wacegi, where in their tundra worlds it was not rare to see Aurora Borealis in the sky. Though the Auroran worshippers claim the Aurora Borealis is just an avatar of The Aurora, and that the deity comes from a higher plane of existence.