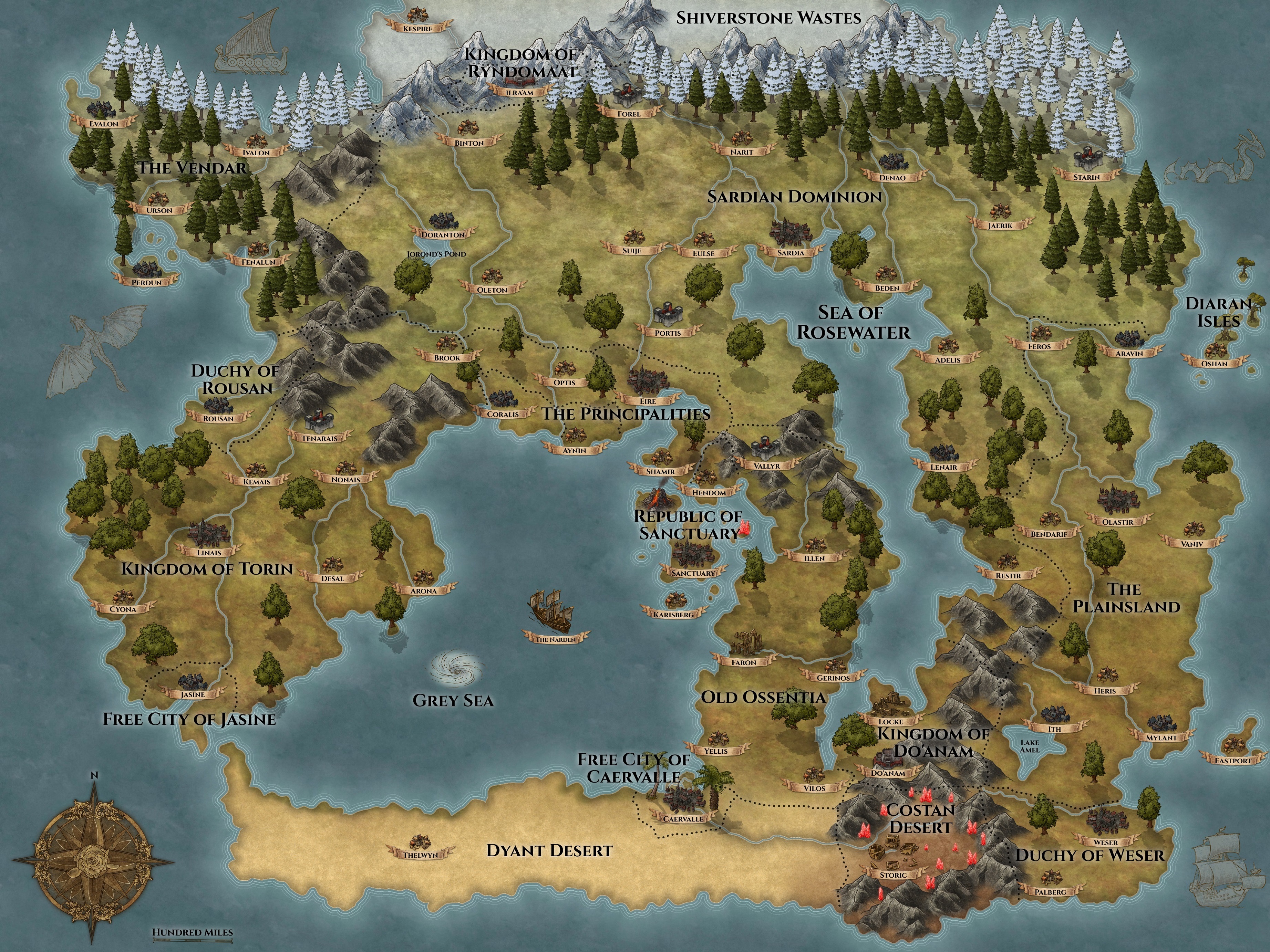 Nevoh is a middle-to-low fantasy world, where magic is powerful but in extremely short supply. The only known races are human ones, though what lurks on foreign continents or what the most powerful mages have created in secret, remains unknown. Ruins of old empires, more technologically and magically advanced are located in the least inhabited portions of the continent, and most modern cities are built upon ruins of old.

Though Nevoh once experienced the politics of medieval realms and had taken the first steps towards real nation building, these processes were halted by a near apocalyptic disaster; the Eclipse.

In Year 819 IIIA, also known as 1 IV, the cycle of day and night was disrupted permanently. A solar eclipse of record length was inflicted upon the world, creating a multi-generational night. When first realized, panic took hold across the continent, looting and rioting destroyed the largest cities, and once-professional armies dissolved into marauding bands to pillage the smaller ones.  Deprived of the light of the sun, global famine ensued, with only the most resilient strains of crops able to grow. The initial crisis, combined with the severe lack of available food led to a culling of nearly ninety-five percent of the continents population over the Eclipse.

The Eclipse is commonly believed to have been caused by either the foul magics of a psychotic (or perhaps inexperienced) wizard, or a wrathful deity punishing the world for its misuse of the arcane. Regardless of it's cause, in the year 61 IVA, just as suddenly as it had left, the sun returned.

The cycle of day and night however, did not completely normalize. The standard Nevohan day lasts six hours, and the night spans twelve. Survivors of the Eclipse have begun attempting to reshape the old world, but in most places, chaos still reigns.

Year 126 IA - Arme Shupria II orders the banishment of two tribes which opposed his succession in the long and bloody civil war following the death of his father. These tribes were sent in opposite directions and are believed to have eventually become the Glyndweri and Leona peoples.

Year 141 IA - Ios Shupria ascends to the throne. She immediately begins construction on a monumental capital city, which would eventually come to encompass the entire Costan and is known today as Storic.

Year 491 IA - Records document the first encounter between the Costan civilization and the Doar peoples after an ill-fated attempt by the former to found a settlement in the mountains.

Year 508 IA - The Costan civilization conquers and enslaves an entire community of Doars in retaliation for the destruction of one of their settlements.

Year 514 IA - Demand for additional slaves cause the upper classes to remove the unnamed monarch and replace him with someone willing to wage war against the Doars in a palace coup. Henceforth, it is codified into law that no monarch can reign for more than five years, and the slave trade begins to permeate all facets of their society.

Year 633 IA / Year 1 IIA - The first Orens arrive along the coasts of the Plainsland and begin migrating across the continent. It is at this point that magic is first referenced in any historical document.

Year 13 IIA - An Oren tribe declares war on the Costan desert civilization after being introduced to a Doar slave. Some scholars believe this is because the Orens had been slaves in their native homeland.

Year 87 IIA - The Costan desert civilization is destroyed after decades of war with the Orens. The Vasarmi are forced to live among the ruins of their once great city, with any attempt to rebuild being quickly ended by various Oren tribes or the now free Doars.

Year 131 IIA - A tribe of Orens crosses the mountains and settles in the Shiverstone Wastes. They are later known as the Nara.

Years 150-350 IIA - New cities are founded across the continent, some of which eventually develop into the nations which would come to dominate Nevoh's third Era. Those which are still known are Linais, Thelwyn, Olastir, Aravin, Hendom, Faron, and Sardia.

Year 407 IIA/Year 1 IIIA - Adelaide the Thorned is beheaded in Sardia and her body is thrown outside the city near a rose bush instead of receiving a proper burial.

Year 141 IIIA - Queen Catherine Ceilem announces her conversion to Epinastry. Sardia begins expanding with the goal of converting it's neighbors. The first Oren nation-state is born.

Year 167 IIIA - Caervalle is founded by a tribe of Glyndweri who refuse to recognize the authority of a newly elected Rhys.

Year 201 IIIA - A group of Palists found the colony of Jasine in what would later become the Kingdom of Torin.

Year 223 IIIA - The Kingdom of Hendom is founded.

Year 290 IIIA - The Kingdom of Oranto is founded.

Year 304 IIIA - The Kingdom of Torin is founded after a farm-lord from Rousan unites the peninsula.

Year 475 IIIA - The Kingdom of Torin annexes Brook after their victory in King Jorond's War. The lake north of Doranton becomes known as Jorond's Pond after the Oranton King Jorond Dosdain is killed and cast into the lake in a coup.

Year 579: The Kingdom of Sardia completely annexes the Kingdom of Oranto. The Orantons are largely forcibly converted to Epinastry.

Year 582 IIIA - The Kingdom of Hendom is divided into the Six Principalities of Aynin, Shamir, Eire, Optis, Binton, and Hamom after it's last King chooses to divide the land amongst his sons.

Year 630 IIIA - Sardian attempts to spread Epinastry are met with fierce resistance in the East and South, leading to the creation of the Knights of the Wilted Rose.

Year 758 IIIA - The Empire of Sardia defeats the Northern Doar Kingdom of Ryndoma'at, forcing the survivors to find refuge inside the caverns of the mountains.

Year 760 IIIA - The twin cities of Evalon and Ivalon found a Kingdom with a dual monarchy in Vendar, with both Nore and Oren Kings.

Year 782 IIIA - Goods begin flowing from across the ocean into the trade ports of Myrati and Olastir. Tales of a massive empire called the Kahlerreich to the East begin to circulate.

Year 800 IIIA - The first Kahlens settle Nevoh and found the colony of Weser for the Kahlerreich.

Year 811 IIIA - The city of Locke is destroyed when thousands die in a terrible arcane accident.

Year 814 IIIA - The Kingdom of Torin descends into civil war when Duke Jacques Rinalier of Cyona asserts that King Charlon Desien was born a bastard.

- The Union between Evalon and Ivalon effectively collapses as the Vendar's two ethnicities begin a brutal civil war after the Oren king decides to end his engagement to a Nore princess.

- The Sardian King dies without an heir. The Knights of the Wilted Rose seize the opportunity to end the monarchy and declare their grandmaster the rightful ruler of the realm.

Year 815 IIIA - The Sardian Dominion begins an invasion of the Principalities.

Year 816 IIIA - Vasarmi messengers travel to every court in Nevoh, warning of a great calamity which threatens to break the very fabric of the world.

Year 819 IIIA/Year 1 IVA - The Eclipse begins, ending the cycle of day and night, tidally locking the world. Famine and chaos ensues. The following years see the disintegration of most civilization as death and darkness engulf the continent.

Year 3 IVA - The Narden is completed and Faron is put to the torch.

Year 5 IVA - The city of Sanctuary is founded by survivors of the Massacre in Faron.

Year 7 IVA - Colonists from the cities of Aravin and Olastir begin settling the island of Diaramin, enslaving the local Leona.

Year 11 IVA - The Northern Doar found the city of Ilra'am beneath the mountains in the North.

Year 14 IVA - Many Palists in Jasine renounce their faith and claim that Palis, the Eternal Sun, has died. Calling themselves the Order of Lunier, they denounce mages for bringing about the death of their God and seize a great deal of power throughout the city.

Year 23 IVA - The Sanctions, hearing rumors of magic, slaughter the residents of Brook and kill the mage responsible for the city's prosperity.

Year 74 IVA - The Sardian Dominion resumes it's invasion of the Principalities, conquering Optis and securing the conversion of the Trade Prince of Eire.