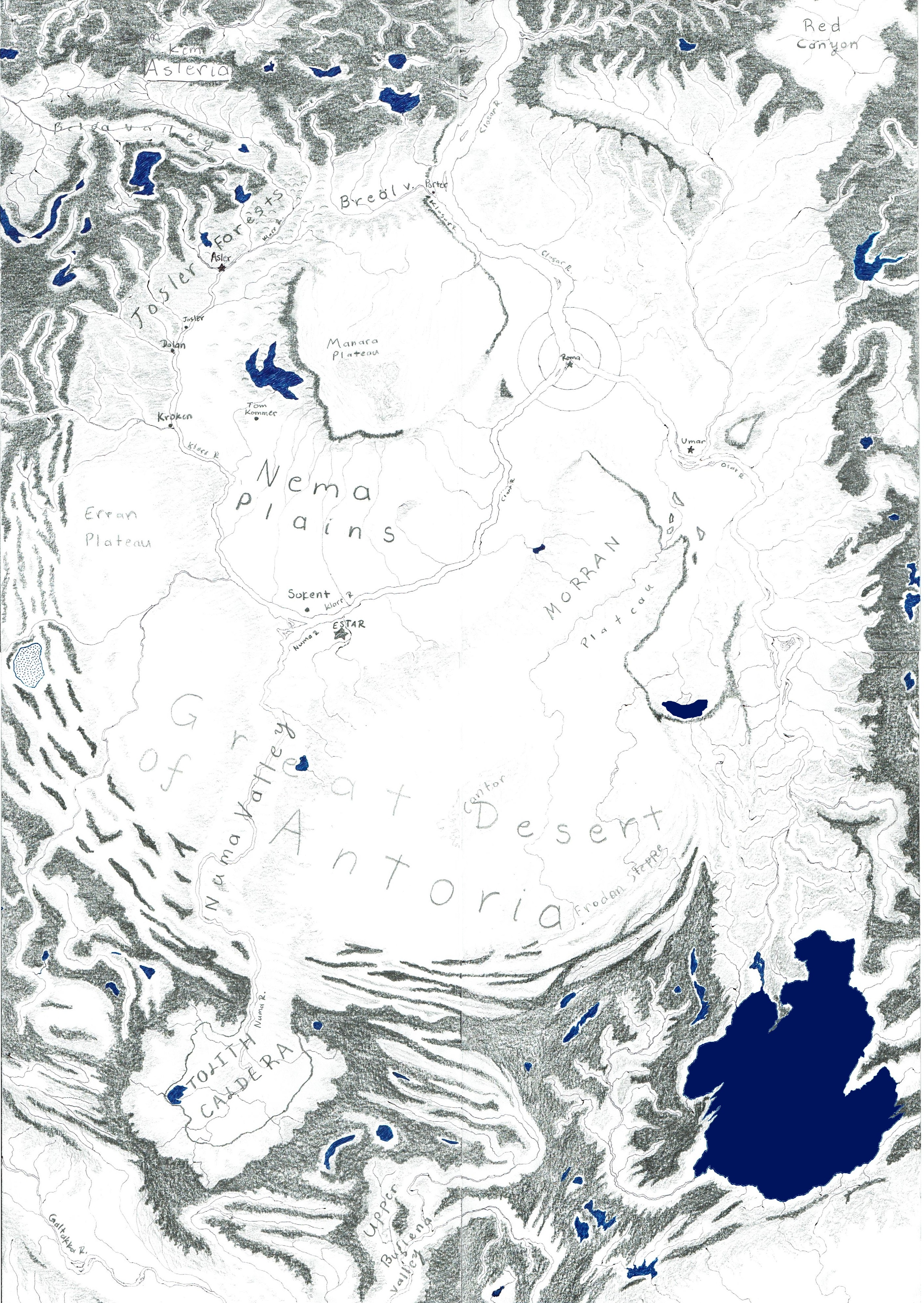 The world's only superpower.

In old english - that is, the english spoken by the original generation of annorans - the planet was called 'Annora.' After Platni's fall, however, English changed, and Annora became 'Antora.' As the centuries rolled by, English gradually morphed into a new language, called Antorian.

However, some enclaves of old english is spoken, even in the modern day; the native inhabitants of the Merk Valley, and several small groups in the northeast mountains.

the Wars for Independence:

The country is surrounded on all sides by the Great Ourean Cordillera, with a few notable exceptions:

1. Lake Bartholomew: A large, alpine lake in the southeastern portion of the country. It rests on top of three major basins, but large amounts of rainfall being pushed up from the equator merges the three basins into one large lake. Though a visual break in the mountains, the lake actually rests upon a large plateau, at an average of 6,500 feet above sea level, and is therefore technically not a break in the cordillera.

2. Belga Valley: An extensive, alpine semiarid valley system in the northwestern part of Cem Asleria. The valleys are dug out by tributaries to the Clarr River on the east, but the principal driver of erosion is the Grelma River, which flows westward to the Pontian Ocean. Like Lake Bartholomew, it too rests upon a large plateau; its average elevation is over a mile above sea level.

3. Red Canyon: A complex series of geological phenomena, the Mordia Gap was carved out first by receding ice caps following the previous ice age. What was left was a sharp ridge, blocking the Great Ourean Basin from the rest of the continent. However, surrounding geography prevented the region from receiving much rainfall; cold, dry air worked at the Mordia Ridge until it became nothing more than a series of long, rolling hills at the southwestern edge of the Mordia Gap. The Drake River begins here, and drains the Doria Plateau to create the Red Canyon; it further drains the Drake Valley, Granger Valley, and the Metorion Valley.

The cordillera catches much precipitation, especially on the eastern slopes of the basin, that allows for flourishing landscapes in even the semi-arid regions.

Much of the southwest is covered in the sprawling Antorian Desert, but gives way to wetter and more fertile lands in the north and northwest.

Antorians are a blend of ethnicities:

Antoria is a representative democracy, with power being split between three states and one federal district: Cem Asleria, Cem Estaria, Cem Umaria, and Cet Montio.

Though technically Cet Montio is a federal district, internal political movements pushing for statehood has granted it much of the same privileges as a state, but the name has not changed.

The Federal Government is composed of three branches:

- Executive: The office of 'Aubrum' is delegated to whomever earns a plurality of 'Cambrum,' or electoral votes. They have power to write, approve, dismiss, and 'fross' (force) legislation.

- Judicial: Each are appointed (with approval by at least two out of three legislative bodies) by the Aubrum, and are generally given life terms. They serve as the interpreter of the law, and are superior in ranking to the other court systems.